Ohio Statewide Sign-On: Stand with the AAPI community against hate 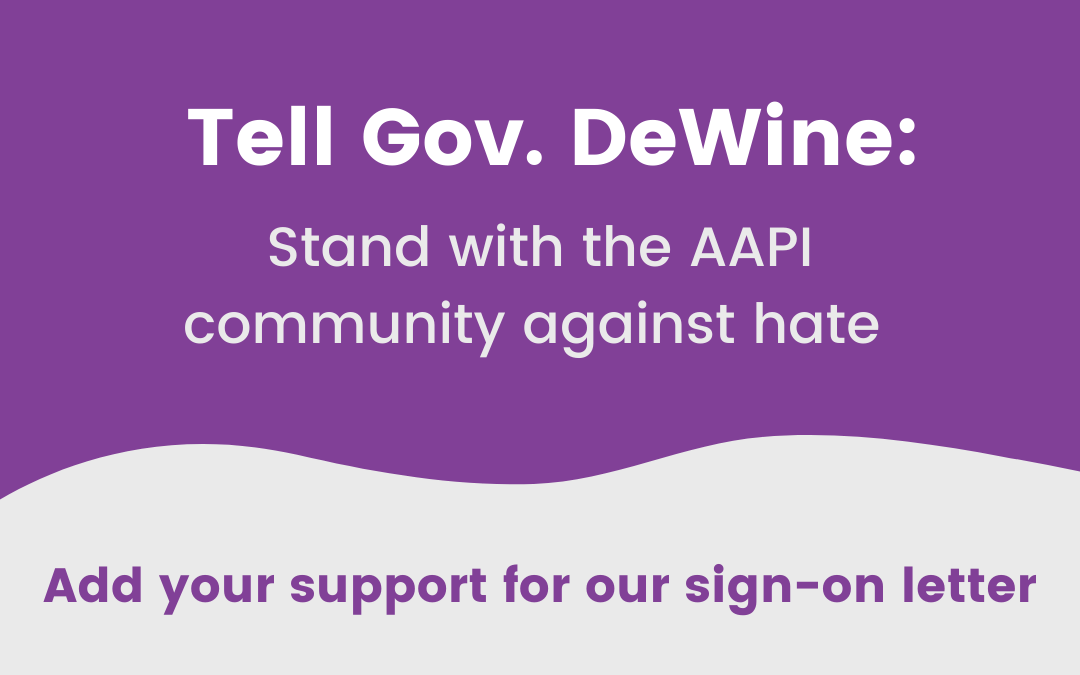 Ohio Statewide Sign-On: Stand with the AAPI community against hate

We can all fight back against anti-Asian racism by showing our support for a statewide Ohio letter to Governor Mike DeWine and the Ohio State Legislature. OPAWL is asking our communities, partners, and allies to stand together in demanding that the State of Ohio act quickly and meaningfully to ensure the long term safety, recovery, and resilience of Asian, Asian American, and Pacific Islander (AAPI) communities across Ohio. We know what will keep us safe, and we demand to be seen and heard.

We are heartbroken and devastated by the shooting and mass murder of six Asian women in Atlanta. This tragedy has brought to the forefront the collective fear, anger, and pain AAPI communities have been experiencing since the start of the global pandemic.

One year ago, 149 organizations and 1,200 Ohioans publicly asked Governor DeWine and other Ohio public officials to take action to address the resurgence in anti-Asian violence during the pandemic. One year later, 3,795 hate incidents have been reported across the country, precious lives have been lost, and nothing substantial has been said or done. Here in Ohio, our Asian elders are not safe walking on the streets for fear of getting sliced, punched, shoved, kicked, and spit on. Young children have been sprayed with Lysol bottles at school, and called racial slurs while going to Graeter’s for ice cream. Asian-owned businesses across Ohio have received crude and threatening hate calls, and a Vietnamese-Thai Restaurant in Dayton was vandalized before being set on fire. Days after the tragic Atlanta shooting, many elected officials still haven’t spoken out against the violence targeting our communities. Because of continued racist rhetoric from politicians like Jon Husted, and the silence of others, extremists believe they have permission to carry out acts of violence against our women, our elders, and our children.

Words are important, but words alone will not keep us safe. We need concrete action, policy, and resources. The same root causes of the shooting in Atlanta are present and remain unaddressed right here in Ohio. Our communities are angry and afraid. We need immediate action from public officials at all levels of government to address the many hateful incidents that have already happened, and to prevent a similar horrific act of violence from happening here in our state.

Click here if you are an individual who wants to support this letter.

If you are a public official or representing an Ohio-based organization, please sign on to a separate form at bit.ly/STOPASIANHATEOHIO by 5 pm EST on Friday, April 2, 2021. **Update: The deadline for organizations to sign on has passed, but organizations can still support our demands in the following ways:

Read the full letter, list of demands, and signatories: bit.ly/STOPASIANHATEOHIOLETTER.

Join Our Campaign
Attend a Community Meeting on 5/18 or 5/19
Share this with your friends and family to spread the word!