Press Release: OPAWL and MAAIN on Senate Parliamentarian’s Recommendation on Path to Citizenship 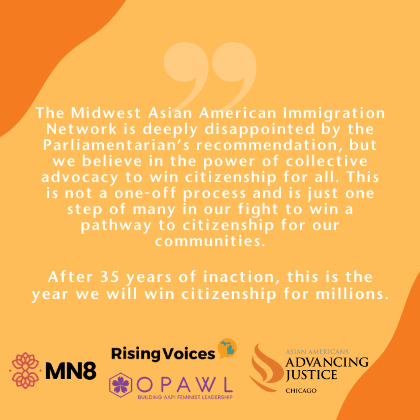 Share this with your friends and family to spread the word!
Contacts:
Jona Hilario, OPAWL | Columbus, OH
614-787-2979, jona.hilario@opawl.org

Response to Parliamentarian’s First Recommendation On Path To Citizenship

COLUMBUS, OH — September 21, 2021 — On Sunday night, the Senate Parliamentarian issued her first recommendation on immigration. The Parliamentarian recommended against the inclusion of a pathway to citizenship for DACA recipients, TPS holders, farm workers, and essential workers, as written in the proposed budget reconciliation bill.

The Midwest Asian American Immigration Network is deeply disappointed by the Parliamentarian’s recommendation, but we believe in the power of collective advocacy to win citizenship for all. This is not a one-off process and is just one step of many in our fight to win a pathway to citizenship for our communities. Some politicians and mainstream media will want to declare the fight for citizenship over, but we know this is not the case. We are confident that Senate Democrats have the power to deliver and we expect them to do so. Millions of immigrants have given so much, especially during the pandemic, so we will keep fighting to win citizenship for as many people as possible.

“We are deeply disappointed in this decision but the fight to provide lawful status for immigrants in budget reconciliation continues. Senate Democrats have prepared alternate proposals and will be holding additional meetings with the Senate parliamentarian in the coming days.”

We call on Senators Durbin and Duckworth (IL), Peters and Stabenow (MI), Klobuchar and Smith (MN), and Portman and Brown (OH) to fight for a path to citizenship for as many people as possible. An unelected, unaccountable staff attorney for the Senate should not determine the future of millions of immigrants, especially when a bipartisan majority of voters supports citizenship for millions.

After 35 years of inaction, this is the year we will win citizenship for millions.