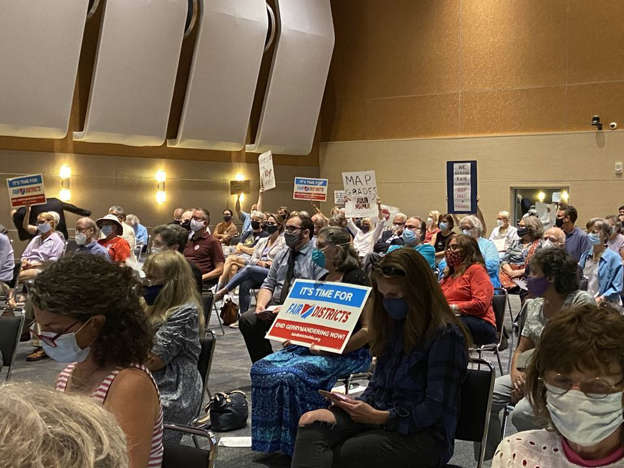 “You’ve lost our trust.” “It’s appalling.” “Don’t you feel dirty when you cheat?” Those statements were among the dozens calling out members on the Ohio Redistricting Committee during a marathon hearing Monday evening at Cuyahoga Community College’s Corporate College East in Warrensville Heights.

During the session that included six hours of testimony, the vast majority of about 70 speakers railed against the commission’s map – proposed by Republicans, who control all facets of state government. They also leveled criticism at the commissioners themselves, especially the five Republicans, for a delayed redistricting process that resulted in maps that highly favor the GOP, despite more than 70% of Ohio voters enacting an anti-gerrymandering constitutional amendment in 2015.

All seven members of the commission were present: Republicans Gov. Mike DeWine, House Speaker Bob Cupp, Senate President Matt Huffman, Auditor Keith Faber and Secretary of State Frank LaRose, and Democrats State Sen. Vernon Sykes and Rep. Emilia Sykes. More than 100 attendees packed the conference room, and those who hadn’t signed up in advance were ushered into one of three overflow rooms.

The hearing was the second of three statewide, preceded by one in Dayton on Sunday, and ahead of one scheduled for Tuesday in Columbus. The commission plans to meet in Columbus on Wednesday to pass final maps in time for a legal deadline that day.

… Tessa Xuan, an Ohio City resident and organizer with OPAWL – an organization to build power among Asian, Asian American and Pacific Islander women and non-binary people – said the commission maps would inappropriately split Asiatown from other nearby working class, low-income neighborhoods such as Hough. Instead the map includes the neighborhood in the same district as Rocky River.

Additionally, Xuan said, “If the Republican-proposed Ohio House map is adopted, then my neighbors across the street from me in Ohio City will live in a completely different district. The line on West 50th Street does not make any sense.”