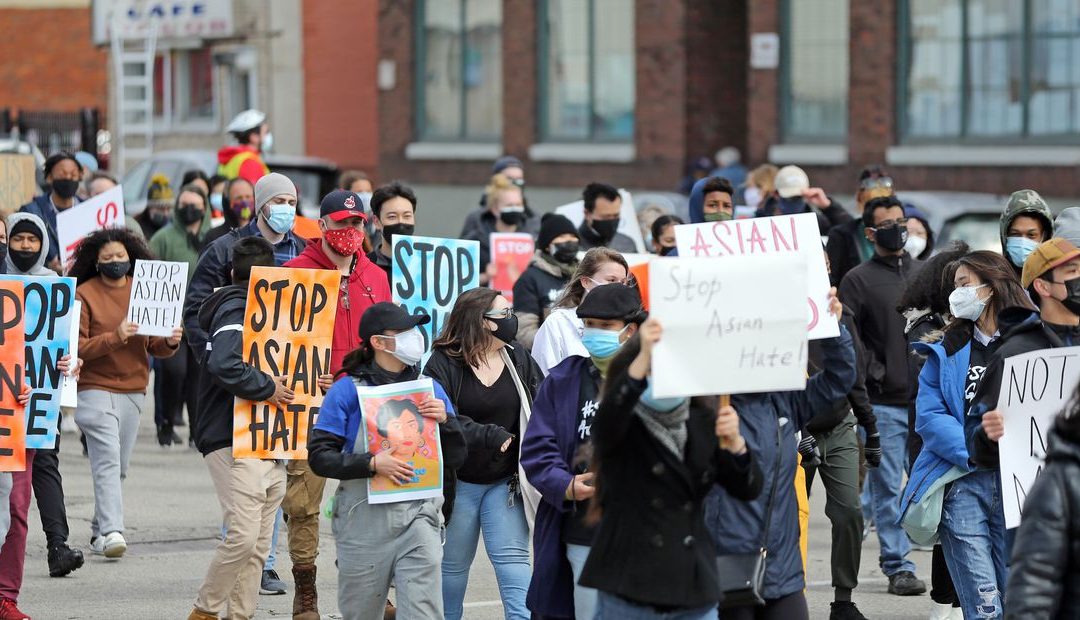 Excerpts from the article:

Tessa Xuan, a Cleveland resident who is co-director of Ohio Progressive Asian Women’s Leadership, said Husted’s words are functionally equivalent to “China Virus,” a phrase which a vandal spray-painted on a Vietnemese-Thai restaurant in the Dayton area in January.

Hate crimes have been on the rise since the coronavirus pandemic took hold. A study from the California State University, San Bernardino’s Center for the Study of Hate and Extremism found anti-Asian hate crimes increased 149% in 2020, while overall hate crimes dropped by 7%.

Xuan said official numbers are vastly undercounted, due to language and cultural barriers and distrust of police within the Asian American and Pacific Islander communities. She said she and other activists are aware of incidents in which Asian-American children have been sprayed with Lysol or harassed when getting ice cream, and more.

That includes Cleveland, where six hate crimes were reported in 2020, up from two in 2019.

Anti-Asian hate crimes are rarely limited to a single ethnic group. Such was the case for Kiwi Wongpeng, the 34-year-old owner of the popular Thai Thai restaurant in Lakewood, who is Thai.

While hearing Asian slurs was nothing new to her, it’s become more frequent for her and her community. Last year, while stopped at a red light, a man pulled up and motioned for her to roll down her window.

“Get out of my country — that’s an order!” he shouted before pausing and offering a threat. “I’ll kill you.”

Like Xuan, Wongpeng said her experience is not unique and one of the few that actually comes to light.

According to Asian and Pacific Islander American Vote, a national political advocacy and engagement organization, the AAPI population in Ohio is more than 325,000, with more than 145,000 eligible to vote. The AAPI share of the electorate is 2.8%. While small, the population is rapidly expanding, having grown 97% since 2000.

With only a handful of AAPI elected officials in the state, there was a common sentiment that Asian American concerns weren’t being heard.

One remedy proposed was one as-yet-unfulfilled promise by Husted in 2018 to revive the Ohio Asian American Pacific Islander Advisory Council. Husted said in 2018 that DeWine was committed to reviving the group, which must be done through executive action.

“The administration, the governor, they have not done sufficient outreach to our community,” said Wang, the APAPA Ohio chairman. “In the past few years, we kept reaching out to them to try to elevate the advisory council. Nobody provided any solid responses to this. This is a time that we really do need to pay better attention to these needs and establish the commission as soon as possible.”

DeWine and Husted both declined to answer why they hadn’t re-established the commission.

However, a legislative fix is in the works through state Sens. Tina Maharath, a Columbus Democrat, and Niraj Antani, a Dayton Republican.

Maharath, who is of Laotian descent, said she also requested that the DeWine administration revive the council, but was told the coronavirus pandemic was the priority.

If enacted, her bill with Antani, who is of Indian descent, would create the Ohio Asian American and Pacific Islanders Affairs Commission and the Office of Asian American and Pacific Islanders Affairs. One of the benefits of doing a commission legislatively is that it is permanent, she said. Councils are formed by executive order and at the whim of individual administrations.

The commission would serve as a bridge for the AAPI community and government, including language translating services for the public and providing information about the AAPI population to the legislative and executive branches.

Maharath said she was optimistic that the commission will be rolled into the operational budget.

“I think many AAPIs and our allies will be looking closely at candidates’ records on solidarity with AAPI communities when we vote in all upcoming elections,” said Xuan of Ohio Progressive Asian Women’s Leadership, which is pushing for the DeWine administration to make policy changes, including funding the state AAPI council so it can support violence prevention and other community support programs. “Not just what they’ve tweeted or said, but what actions they have actually taken to stop anti-Asian hate, invest resources into ours safety and healing, and support community-led solutions to prevent future violence.”