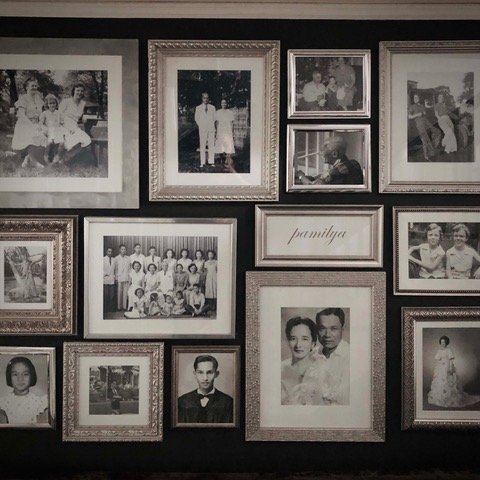 Jing Lauengco is a brand strategist, chief optimist, business consultant, and the founder of OtherBrownGirl.com. In this essay, Jing writes about the stories that old photos of her parents tell about their Filipino American family immigration story.

It all began with me discovering a 2 x 3 inch small black spiral album with brittle, yellowing photo pages buried in the back of my dad’s redwood desk drawer after his passing from cancer. A gift—a sparkling, magical clue left behind by him as if on purpose. I loved my dad’s hand-drawn type on the cover, lovingly scripted in his doctor–signature–meets–dad–font swooshes and swirls.

Square–inch gems of my teenage father holding up a huge starfish with both hands. In his Sunday best among village nipa huts from the ‘40s. And on the beach with a motorcycle laughing with friends — always laughing and smiling. Scribbled on the photo backs were more of his hand-drawn Filipino captions like a foreign code hinting at a hidden hatch to the past.

I wanted to honor him and remember the dreams that lived in him and now in me, inspiring our gallery wall. To have photos and reminders of his smile, spirit and kindness greeting me each day with gentle reassurance, just like him. My dad showed me how to not be afraid — how to live and die — with everyday grace and gratitude.

I’ve heard that people pass to make room for new births, new energy, and new souls to break through. Now, whenever I hear church bells or see a lit parol lantern star that I used to make as a kid with him to celebrate Filipino holidays, I think of my sweet dad and his sense of adventure and optimism. I ran a marathon in his honor to raise money for cancer. It was in Anchorage, Alaska on Father’s Day during summer solstice, raising $9,500 for cancer research. I would do long runs, trying to run from my own grief, saturated sadness and hollowed out numbness. My dad passed on Sweetest Day on October 18th. (His timing was just right, like most everything he did…) I miss him.

What I noticed more than anything is that stories and storylines are really mile markers for where we have come, been, and where we might be headed.

Every story created is a remix of all the days and stories of the past — our own and our families — including all the generations before me.

The way we tell stories to ourselves and each other casts a glow or glare around the halos of truth and our own everyday transformation. In some ways, stories truly never end. They continue to unfold and cascade in real time, flowing and going in the direction of our energy, growth, and beliefs — widening humanity and how human we dare to be and feel. 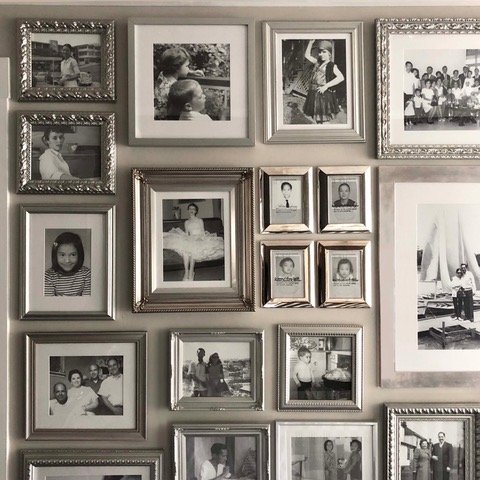 When I went back to Manila to visit my mom’s childhood home and farm, my aunts told me that my grandfather, Antonio Solomon, my mom’s dad, wanted to be a lawyer. He instead chose to stay and tend to the family farm in rural Bataan so that his siblings could attend college instead. My grand-father was very proud that his son, my Tito, Uncle Fred, would later go on to become the family lawyer, fulfilling my grandfather’s own dream. My Tito Dadu became an engineer, and my Tito Boy became a vet. My grand-mother, Marina Solomon, did the same, staying back at the family farm while her brothers went on to do well, investing in real estate and malls.

I learned that we had family who were shipping magnates sailing to Norway for fishing expeditions on the high seas following ancient trade routes. Who knew?”

I also discovered that my mom wanted to be a doctor and asked my grandparents if she could go to college to study medicine. (How spunky of my feminist five foot mom back in the early ‘60s!) According to my aunts, my grandparents said that they couldn’t afford to send my uncles into law, engineering, and vet studies and my mom into medicine at the same time, so my mom sacrificed her dream and ended up becoming a teacher, which seemed sadly “more appropriate” for women of that era.

As my aunts were sharing this with me while we were bumping along in the back of the van during our trip through the Filipino countryside, my gray–haired mom smirked and smiled, wistfully murmuring with her trademark,‘“Oh Jing, that was many moons ago…’ It was the first time I paused to flash back, pondering my mom as a young twenty–something with hopes and dreams that transcended her rice field roots and brothers. All as we rumbled past more farmers in their fields with sleepy carabao.

It was her story, one for which I never had heard the beginning — only the ending where she married my dad. It was also the first time where I pictured my tiny mom asserting her life vision for herself. Who knew that she would end up in the United States and in Ohio, half a world away? Did she?

I wanted to have a connection to my “childhood mom” — any connection that would give me a glimpse into who she was early in her life and who she would become. It’s funny having such a large, extended family halfway across the world. My grandma Marina was tough. So tough, she protested my mom and dad’s wedding and refused to attend since they decided to marry within the same year as my Tita Didi’s. A Filipino superstition pro-claimed two weddings within the same year to be bad luck. Honestly,  I wonder if maybe my mom’s nanay (mom) and my lola (grandmother) were sad that all of her daughters were leaving behind their homeland and family farm with new husbands for adventures in the U.S.?

Apparently, my mom was selected by an ad agency back in the day to be a Manila milk model for a national Dairy Gold Milk campaign. Well, until she met my dad.

My mom? She doesn’t even drink milk! But she came to America instead to follow my father’s dreams instead of her own. (What we do for love…) I love this photo of them as they are about to board the 22+ hour flight headed to America flanked by my dad’s med students with 18-month old me and my three-year old big sister in tow off camera. Look at my mom’s corsages! But more importantly, look at her “What am I doing?” face and weak forced smile, as my dad — completely radiant and oblivious — is beaming with pride at the promise of a new life, a better life. Doesn’t it look like they’re going to a homecoming dance in America? 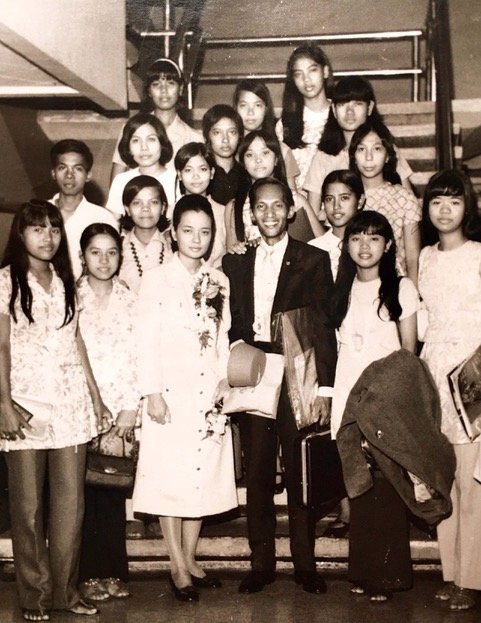 Or, they were just voted Homecoming Queen and King, pausing for this photo opp on the gym stairs with the all Filipino student council? And what’s the deal with my dad’s top tassel pillbox hat?!

I embarked on the trip “back home” to the Philippines to learn about my family history. I guess the photos of my parents were a kind of “homecom-ing” to their second home and new homeland away from the one of their childhoods. I wonder then, would that make Manila my second home using this same theory?

I yearned to not lose the link or family folklore that was dormant at my grandparent’s soon-to-be sold farmhouse and family estate. Back at my grandparent’s farm, I saw my mom as a 13 year old for the first time ever. What? Wait, she had wavy hair as a kid? I had never seen a photo of my mom as a baby or child and it took my breath away.

My mom looked beautiful with her soft smile, black bob, 40’s mock turtle-neck and dark skirt, kneeling in the front right corner among small siblings and cousins in a sprawling family photo…who were all these people?

I was slowly piecing together the picture that I desperately wanted and needed. Clues to a lifetime and family line had once been locked away across the world in a dusty dining room buffet of old family photo frames, like how the discovery of my father’s buried photo album unlocked my own living heritage in real time. I instinctively took photos of everything I could find, unearthing buried treasures and memories that before laying my eyes on them, had never existed before. A living family history and heritage was alive and well.

Now, I’m fortunate to be living with these daily treasures and reminders adorning our first and second floor hallways. When I’m not rushing with a basket of laundry up and down the stairs, I take a moment and a breath to admire the gallery of ancestors and all of their legendary tales.

I gaze in wonder at the passport photos the most — knowing my parents deeply believed in themselves and each other to find their way somehow. Betting on themselves and their own potential.

Our gallery walls and halls are everyday reminders for me (and our half-brown kid) of the journeys, stories, and sacrifices to be celebrated and not forgotten by time or by us. 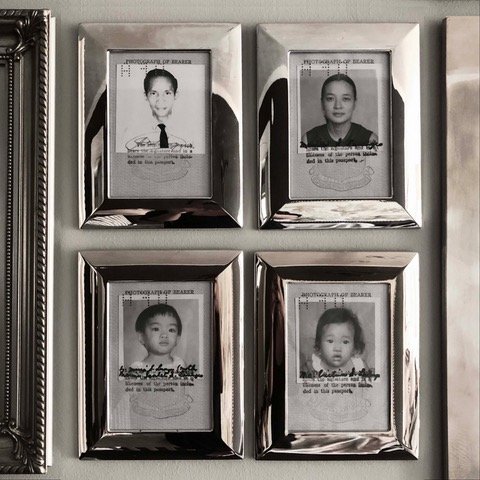 Urge Congress to clear the family-based and employment-based visa backlogs, protect and strengthen family-based immigration, and support comprehensive immigration reform that will reunite and keep all families together. The family immigration system in the U.S. has not been updated for over 20 years, keeping millions of people apart from their loved ones as they remain stuck in visa backlogs for years and even decades.

Anonymous →
Share this with your friends and family to spread the word!