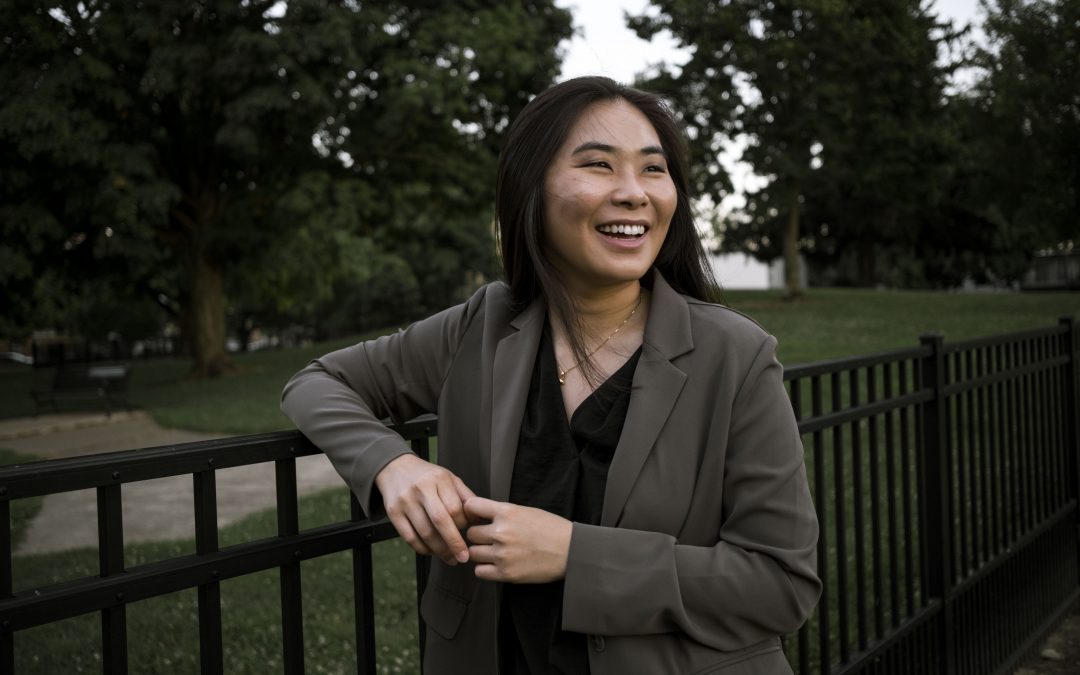 Eunice Uhm has always lived with the burden of a family secret: Her father was undocumented. Born in South Korea, Uhm, now 30, moved to the United States with her parents and two sisters when she was a teenager. They did everything they could to keep her father safe, but their worst fear still came true.

In 2018, while pursuing a doctorate degree at Ohio State University, Uhm received news that her father had been detained by Immigration and Customs Enforcement officers and was going to be deported. Now, after decades of living in fear and secrecy, Uhm has decided to tell her family’s story.

Last month, the Ohio Progressive Asian Women’s Leadership (OPAWL) –– a community organization with local hubs in Columbus, Cincinnati, and Cleveland –– launched a storytelling campaign called “Love Has No Borders.” The project tells the stories of a dozen Ohioans through photography, video, poetry and other media forms. Uhm is one of them and discussed her experience in a podcast episode.

“We thought that if you’re undocumented, you just stay hidden from everyone, and we felt so alone,” said Uhm, who grew up in New Jersey and later moved to Columbus. While the rest of the family all received citizenship, Uhm’s father –– whose tourist visa expired before he could apply for a green card –– remained undocumented.

She remembers how her father almost never went outside and how they couldn’t make a trip to Niagara Falls because they were asked to show identification at the train station. One time, the police dropped by at 4 a.m. to inquire about a car alarm that went off outside their house, and the whole family could not sleep for the rest of the night.

“I want to share my story so that if there’s anyone going through the same thing, they’ll know that there are resources and there are people that they can reach out to,” Uhm said. “I wish I knew that.”

OPAWL mostly works with Asian Americans and Pacific Islanders. While the storytelling campaign includes a diverse group of immigrants, a majority of featured residents came from countries such as South Korea, Japan, Thailand and the Philippines. Currently, national discussions on immigration tend to focus on the coasts or the borders and often neglect the Midwestern narrative, according to Reiya Bhat, an immigration organizer at OPAWL who is in charge of the initiative. But policies and rhetoric on the national level impact everyone, she said.

“There’s sometimes this perception that Midwestern states are predominantly white, so immigration issues don’t matter as much here,” she said. “But immigrants here have also gone through so much, and it’s really important to acknowledge the specific issues that come with being an immigrant in Ohio or the Midwest.” One unique challenge facing many Ohio immigrants is having to deal with a lack of social resources and community support, Bhat said. Compared with states like California or Texas, many parts of Ohio do not have a history of foreign-born populations settling in the areas in modern times or the well-established cultural infrastructure that comes with it. “People are settling in places where they are completely new, and they’re creating a path forward for other immigrants to come and feel welcomed,” Bhat said.

Jenika Gonzales, one of the storytellers now living in Cleveland, grew up in the Philippines. In the early 1990s, her mother moved to the U.S. to provide caregiving services for different families, and Gonzales joined her when she was 14. “(My mom) has had employers who took advantage of her just because of her status at the time,” Gonzales, 29, said in a video. “It would have been easier for my mom if she had a network of people that were not only Filipinos but people who understand the human aspect of immigration.”

Hsa Win, another storyteller, spent the first 11 years of his life in a refugee camp in Thailand after his family escaped ethnic conflicts in Myanmar. He belongs to the Karen group –– a minority that resides in the southern parts of Myanmar. Growing up in a refugee camp, Win did not have the opportunity to learn about the traditions, dance or food of his culture. Now living in Akron, he is doing community work to advocate for and uplift the Karen community there. “I see my community as a space for joy and resiliency,” he said in an essay. “Being active and involved in Karen spaces has allowed me to learn different opinions, feel supported and share happiness.”

Organizers at OPAWL are hoping that by telling these stories, they can help dispel misconceptions about how the immigration system works. “I think many people think there’s an immigration line and if you do everything the right way and get in the line, then you and your family can become permanent residents or citizens,” Bhat said. “But there are actually so many barriers. It can take a very long time, and it’s extremely costly.”

It took Gonzales eight years before she was able to move to the U.S. to live with her mother. Her three siblings also waited more than 15 years in the Philippines before their visa applications came through two years ago. “Not having your mom for like a decade and not seeing your siblings for another decade, it’s like you lose so much of yourself,” she said. “A lot of people say there is that light at the end of the tunnel. There’s already so much that’s lost before you get to that finish line.”

Another goal behind the initiative is to garner public support for comprehensive immigration reform, according to Bhat. Aside from the storytelling component, the group is also organizing a letter campaign to urge Congress to keep all immigrant families together. “Right now, we’re in a very politically strategic moment,” she said. “With a democratically elected White House and Congress, there’s the higher chance to pass immigration reform and more national energy around it, so this year felt like an especially critical time to address this issue.”